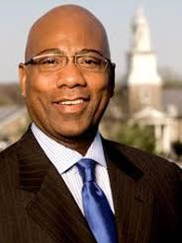 Dr. Wilson's tenure as Morgan's president, which began on July 1, 2010, has been characterized by great gains and a momentum of progress for the University. Under his leadership, included among the most recent highlights are:

Dr. Wilson has authored two books and more than 20 articles published in scholarly journals. Among the many honors and recognitions he has received for his work: he was named one of the nation’s top 100 leaders in higher education by the American Association of Higher Education in 1998, was selected as one of The Daily Record newspaper’s Influential Marylanders for 2011, and was honored by the University of Alabama with an award for outstanding leadership in engaged scholarship in April 2011. In January 2018, the Lumina Foundation elected Dr. Wilson to serve on its Board of Directors. Prior to this election, the U.S Under Secretary of Commerce for Standards and Technology had appointed him to serve a three-year term as a member of the National Institute of Standards and Technology’s (NIST’s) Visiting Committee on Advanced Technology. In 2010, former President Barack Obama appointed him to his 11-member Board of Advisors on Historically Black Colleges and Universities. Dr. Wilson served on the Board of United Way of Central Maryland. Dr. Wilson’s achievements as leader of Maryland’s Preeminent Public Urban Research University have clearly been strong, but it is the character he brings to the presidency, a character shaped by the intangibles of his background, that is perhaps most impressive of all.

Dr. Wilson’s educational philosophy is to put the students’ experience first. As a leader, he is a consensus builder and a strong believer in transparency of process. His goal is to make Morgan a leader in producing the next wave of innovators in the U.S.