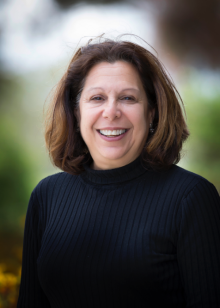 Vicki H. Grassian began her independent academic career at the University of Iowa in 1990. She rose through the academic ranks and was name the F. Wendell Miller Professor of Chemistry in 2010. At Iowa, she was involved in a number of initiatives. She was appointed the Founding Director of the newly formed Nanoscience and Nanotechnology Institute by the Vice President for Research, a position she held for a decade; she directed the Nanotoxicology Core of the NIEHS-funded Environmental Health Sciences Research Center in the College of Public Health; she was the PI of a multi-department, multi-college NSF-REU program focused on Environmental Systems; and she developed and led the Environmental Chemistry track of the Environmental Science program for nearly a decade. In 2013, Professor Grassian became co-Director of the Center for Aerosol Impacts on Chemistry of the Environment (CAICE), a multi-institutional NSF-Chemical Center of Innovation headquartered at the University of California San Diego. In January 2016, she joined the faculty at UC San Diego as Distinguished Professor. She currently chairs the Department of Chemistry & Biochemistry there.

Professor Grassian's research focuses on the chemistry and impacts of environmental interfaces including atmospheric aerosols, geochemical interfaces, nanomaterials in the environment and indoor surfaces. She has published over 350 peer-reviewed and 16 book chapters as well as edited three books. She has given over 300 invited presentations on her research, including the 2019 American Chemical Society National Meeting Presidential Plenary Lecturer, 2018 Florida State University - Hoffmann Lecture, 2017 TEDx San Diego, 2016 Indoor Air Conference Plenary Lecturer, 2015 Goldschmidt Conference Silver Anniversary Plenary Lecturer, 2012 Hascoe Distinguished Lecture at the University of Connecticut, and keynote speaker for the 2012 Dorothy Crowfoot-Hodgkin Symposium at the University of Zurich. Professor Grassian is a Fellow of six scientific societies and is also the recipient of several national and international awards. Most recently, she received an ACS-CEI Award for Incorporation of Sustainability into Chemistry Education (2018), the William H. Nichols Medal from the New York Section of the American Chemical Society (2019), the IUPAC Distinguished Woman in Chemistry or Chemical Engineering Awardee (2019), and the American Chemical Society National Surface Chemistry Award (2021). In 2020, she was elected a member of the American Academy of Arts and Sciences.