Image of Sgr A*, the black hole at the center of our galaxy

At the center of our very own Milky Way galaxy, scientists long suspected that there was a supermassive black hole, and they named this black hole Sagittarius A* (Sgr A*, pronounced "sadge-ay-star"). Thanks in part to U.S. National Science Foundation support, their years of rigorous research confirmed their suspicions. On May 12, 2022, scientists released the first direct visual evidence of Sgr A*. 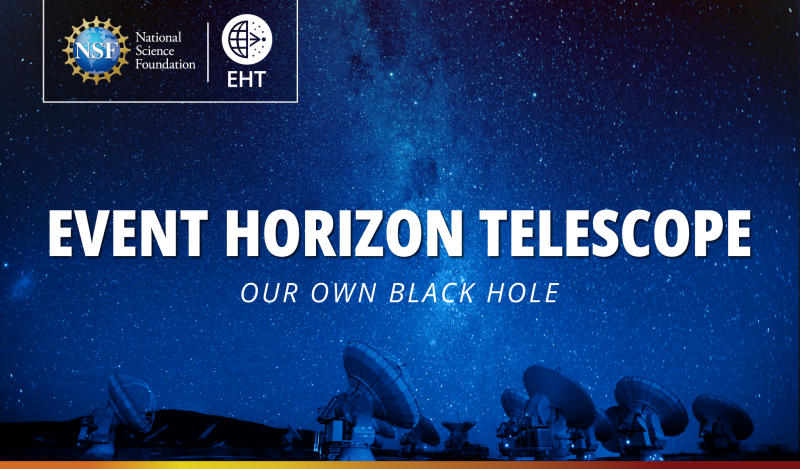 A black hole in our backyard

Because it's located at the center of the Milky Way, understanding how Sgr A* functions is fundamental to the larger goal of understanding how our galaxy formed and continues to evolve. To start their investigation, scientists modeled how Sgr A* might look by using the movements of stars close by. They could predict the size of the image and the shadow, but they had to find the right combination of telescope views to find out that they were in fact correct.

Sgr A* was challenging to view because, while it is 4 million times more massive than our sun, it is considered small in the world of black holes. It is also surrounded by fast-moving gas, and each view is partially obscured because of other objects in our galaxy passing through the viewing path. On the positive side, however, Sgr A* is the closest supermassive black hole to Earth at only 25,640 light-years away, making it close enough to be seen despite its small size. To overcome the limitations to viewing, scientists layered many images, which they created by combining data collected at telescopes from many different locations on Earth to make a composite image, like layering pictures taken through Swiss cheese from many angles to see what's on the other side.

The image shows a bright ring around a spot of darkness, a spot we have come to understand as a shadow of a black hole, the direct visual evidence of the black hole's existence. Seeing the shadow like having our own super laboratory in the sky to provide physical evidence to back up predictions. From this imaging, we learn not only about our galaxy but also about how gas acts around black holes more generally, confirming models made back here on Earth.

The road to creating an image

Albert Einstein first predicted the existence of black holes with his theory of relativity, and this image is yet another observation supporting his hypothesis. Roger Penrose followed this theory with groundbreaking research, using mathematical proofs to show how black holes formed. Then, NSF-supported researcher Andrea Ghez and, independently, Reinhard Genzel in Germany observed motions around Sgr A* starting in the early 1990s. For this work, the three were awarded the 2020 Nobel Prize in physics "for the discovery that black hole formation is a robust prediction of the general theory of relativity." This work continues to this day and was an essential part of the process that allowed us to create the direct images.

On April 10, 2019, the first direct visual evidence supporting the existence of black holes was released; people the world over marveled at the first image ever of a black hole - the black hole in the center of M87, a massive galaxy in the Virgo galaxy cluster at a distance of 55 million light-years from Earth. The creation of the Sgr A* image used a similar process: the effort combined the work of over 300 researchers at 80 international institutions and eight telescopes across the globe (one more than for M87). In addition to developing complex tools to overcome the challenges of imaging Sgr A*, the team worked rigorously for five years, using supercomputers to combine and analyze their data, all while compiling an unprecedented library of simulated black holes to compare with the observations. Of those supercomputers, the analysis includes nearly 80 million central processing unit hours on the NSF-supported Frontera supercomputer and 20 million CPU hours on the Open Science Grid. NSF's South Pole Telescope and ALMA, the international Atacama Large Millimeter/submillimeter Array telescope, managed under NSF's National Radio Astronomy Observatory, were two of the telescopes used to collect data on Sgr A* in 2017.

Each telescope has its own research objective separate from understanding event horizons (the interface of the black hole with visible space and matter), but the Event Horizon Telescope network coordinated each telescope to spend a few weeks each year looking at Sgr A*. It was these few weeks of sky-gazing in 2017 that were combined to produce this first image of Sgr A*. This was a massive, years-long undertaking. Gigabytes of data were collected, so much that the data from each viewing had to be physically delivered on hard drives and took years to combine. The success of these efforts built upon previous analytical work done by many, such as the NSF project Black Hole PIRE, a program focused on developing the technological and algorithmic infrastructure involved in understanding event horizons.

The widespread collaboration was essential because each telescope has a different view from its place on Earth and therefore provides a unique contribution to the data set, which combines for a fuller view of Sgr A*. The NSF South Pole Telescope at Amundsen-Scott South Pole Station was especially important because it has a continuous view of Sgr A*. The partnership to combine these data reached far outside the telescopes as well to include universities and observatories across the globe, such as the MIT Haystack Observatory, and NSF instrumentation, especially supercomputing.

As with all good research, these exciting findings have led researchers to even more questions and many possible avenues to the next exciting discovery. One path is to continue refining the underlying analytical tools that enable the combining and analysis of existing data and could lead to even clearer images -- or even videos. Additionally, there are more years' worth of data ready to look at now that this project is complete.

The collaboration has several future options, one of which is the Next Generation Event Horizon Telescope, which NSF is supporting for design and development work and which could update and improve many parts of the collaboration, add new partners and imagine the future of investigating event horizons.

The team also hopes to integrate more radio telescopes from across the globe to provide a more detailed view of each black hole and enable researchers to see more and fainter objects. However, a major limitation is that BH M87 and Sgr A* are the two main Black Holes accessible to our view, with a third a much more distant possibility. Efforts to see additional further Black Holes requires more telescopes with even more refined hardware and possibly linking of a space-based radio telescope to ground telescopes, an effort researchers say they are exploring how to make work.

The building of the infrastructure such as the individual telescopes took decades of scientists' and engineers' time and significant sustained support by agencies such as NSF. Along the way, the infrastructure has not only given us insight into event horizons but also into hundreds of previously unanswered questions about astrophysics. The creation of the image of Sgr A* was possible due to the unbroken support of basic research in pursuit of fundamental goals. Future breakthroughs will rely on the continuation of that support.