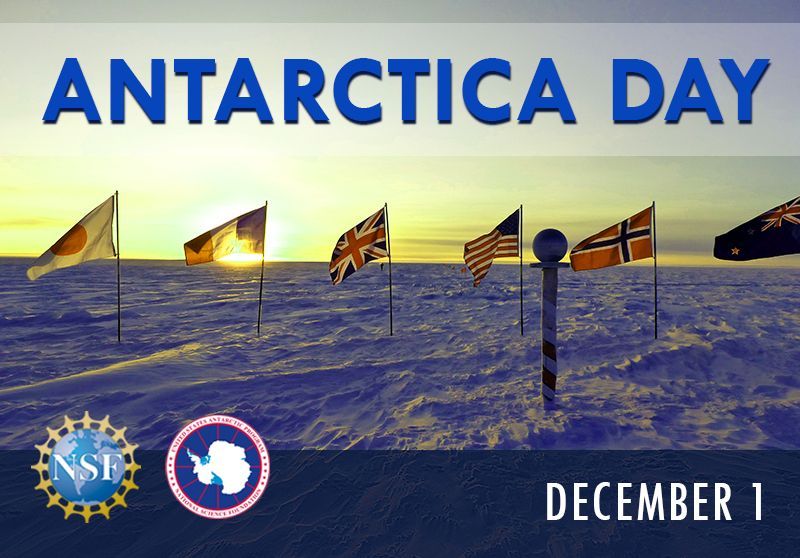 December 1 is Antarctica Day, which celebrates the anniversary of the signing of the Antarctic Treaty in 1959 and the setting aside of nearly 10% of the Earth "forever to be used exclusively for peaceful purposes ... in the interests of all mankind."

The Treaty recognizes Antarctica as a preserve for peace and scientific study and went into effect with 12 signatories. Today, more than 50 nations recognize the Treaty. It is the foundation upon which decades of scientific achievements and advancements rest.

Among other provisions, the Treaty froze territorial claims to the continent, banned nuclear weapons and waste on the continent, and preserved the entire region south of 60 degrees south latitude for peaceful purposes. The banning of activities of a military nature makes it effectively the first nuclear-arms control agreement in history.

As stewards of the U.S. Antarctic Program, the U.S. National Science Foundation provides oversight of science in the region, including logistical and programmatic support to thousands of scientists who travel to the continent each year to conduct research in fields that range from climate change and astronomy to weather and paleontology.

“Antarctica is ground zero for understanding global change effects on society”, said Roberta Marinelli, the Director of NSF’s Office of Polar Programs.  “The continent, ice sheets, and oceans play a crucial role in the distribution of heat over our planet, and the extent of sea level rise.  They also show how earth system processes affect living marine resources that humans depend on”.

USAP operates three year-round research stations and two research vessels, coordinates all U.S. science conducted on the continent, and works with other federal agencies, the U.S. military, and civilian contractors to provide the logistical support for research. Additionally, USAP works in collaboration with other international Antarctic programs, supporting global research and initiatives.

The research conducted has three goals:

While the global pandemic has made USAP's mission even more complex, important and groundbreaking research continues – in particular, research on climate change.

Over the past 30 years, the amount of ice flowing out of Antarctica's Thwaites Glacier has nearly doubled. Warm ocean water from the Amundsen Sea circulates under the ice, creating melt, which  loosens the ice from the bedrock below.  This hastens flow and glacial retreat, and contributes to rising sea levels.

The International Thwaites Glacier Collaboration, supported jointly by USAP and the British Antarctic Survey, is exploring the ocean and marine sediments, measuring currents flowing toward the deep ice, and examining the stretching, bending, and grinding of the glacier over the landscape below.

The stakes are global: should the Thwaites Glacier collapse, the ice released could raise global sea levels by as much as 11 feet. Scientists are still trying to determine how long this will take. It could take centuries or just decades.

Another aspect of climate change studied in Antarctica by NSF researchers is the impact of warming temperatures on Antarctic ecosystems.

Over the last two decades, NSF advanced globally unique demographic studies of Adélie penguins in the Ross Sea, Antarctica, to explore several potential mechanisms for population change. The studies are helping researchers better understand population dynamics and how penguin colonies might respond to future environmental change. More information on past, present, and future penguin studies can be found on the Penguin Science webpage.

In Antarctic Peninsula region, which is experiencing the most rapid climate warming on the planet, scientists involved in the Palmer Station Long Term Ecological Research Study are determining how the rapid reduction of sea ice cover affects all levels of the food chain. Research includes many organisms in the food web, including bacteria, viruses, phytoplankton, krill, zooplankton, penguins, seabirds, and marine mammals.

Antarctic researchers are literally at the tip of the iceberg, exploring new frontiers and seeking answers to some of the planet's most important questions. None of this would be possible without the Antarctic Treaty.

A moment that changed Earth