The National Medal of Science

Office of the Director (OD)

The nomination period for 2022 is now closed. 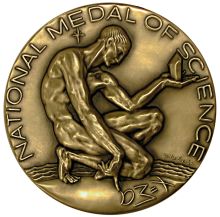 Established in 1959 by the U.S. Congress, the National Medal of Science is the highest recognition the nation can bestow on scientists and engineers. The presidential award is given to individuals deserving of special recognition by reason of their outstanding contributions to knowledge in the physical, biological, mathematical, engineering, or social and behavioral sciences, in service to the Nation. These broad areas include such disciplines as astronomy, chemistry, computer and information science and engineering, geoscience, materials research, and research on STEM education.

A committee of distinguished scientists and engineers is appointed by the president of the United States to evaluate the nominees for the award. Medals are presented to recipients by the president during an awards ceremony at the White House.

History of the medal

Each year, NSF sends out a call to the scientific community for the nomination of new candidates for the National Medal of Science. Individuals are nominated by their peers, with each nomination requiring three letters of support from individuals working in science and technology.

Nominees must be U.S. citizens or permanent residents who are applying for U.S. citizenship, who have done work of significantly outstanding merit or have had a major impact on scientific thought in their field.

Once received, nominations are sent to the President's Committee on the National Medal of Science, which is a board composed of 16 presidential appointees comprising 14 scientists and engineers and two ex officio members: the director of the Office of Science and Technology Policy and the president of the National Academy of Sciences.

In addition to the criteria above, the committee also seeks nominations of individuals who promote the general advancement of science and individuals who have influenced science education.

The drop down items below will help you with the nomination process.

The National Medal of Science is awarded individuals deserving of special recognition by reason of their outstanding cumulative contributions to knowledge in the physical, biological, mathematical, engineering, or behavioral or social sciences. These broad areas include astronomy, chemistry, computer and information science and engineering, geoscience, materials research, and research on STEM education.

Nominations will be carried over for a period of three years, including the year of nomination. After that time, it is possible to re-nominate an individual for consideration, if they are still eligible.

Nominations must be submitted electronically.

A complete nomination consists of:

The President's Committee on the National Medal of Science has established the following considerations for selection of candidates:

The National Medal of Science depicts a human figure, surrounded by Earth, sea and sky, contemplating and seeking to understand nature. The crystal in the figure's hand symbolizes the universal order and also suggests the basic unit of living things. The formula the figure is sketching in the sand symbolizes scientific abstraction.

The gold medal was sculpted by the prolific medalic artist, Donald DeLue, who also made sculptures for Omaha Beach on the Normandy coast of France, as well as the Boy Scout Memorial Tribute in Washington, D.C. DeLue's sculpture for the medal was based on a design by Richard H. Bolt, an associate director for planning at NSF, who had a background in fine arts. The design was approved by President Dwight D. Eisenhower in Executive Order 10910, signed on Jan. 17, 1961.

Ideal nominations demonstrate that the individual is deserving of special recognition by reason of their outstanding cumulative contributions to knowledge in the physical, biological, mathematical, engineering, or behavioral or social sciences, in service to the nation. These broad areas include such disciplines as astronomy, chemistry, computer and information science and engineering, geoscience, materials research, and research on STEM education.

With a few exceptions, anyone can submit a nomination, including individuals from the nominee's home institution. People may not nominate themselves, nor may nominations come from immediate family members. Current NSF staff should not submit nominations.

The nomination is an opportunity to craft a compelling vision and story for the nominee; it is generally recommended that the nominator be someone who is very knowledgeable about the nominee's work.

You may nominate someone without their knowledge; however, it might be beneficial for the nominee to be involved in the process — their input may provide useful insights for crafting a compelling nomination.

You can make as many nominations as you like — of the same person or different people.

Nominations are eligible for three years — the year it a nomination is submitted and the following two years.

The most recent laureates for the National Medal of Science were announced in 2015 and honored at a ceremony at the White House in 2016. NSF and the current administration are working to address the backlog of nominations. We will post new information when we have it.

After committee review, the president makes the final decision on who will be awarded the National Medal of Science, and the White House makes the announcement. Currently, there is no set date for making an announcement.

Videos of past laureates

Past National Medal of Science Awards

Established in 1991, the National Science and Technology Medals Foundation is a nonprofit corporation that seeks to enhance the prominence of the National Medals of Science and Technology as well as the recognition of laureates and their achievements. Working through a private-public partnership with the National Science Foundation and the Department of Commerce Technology Administration, the foundation strives to increase public awareness that America's economic strength, competitiveness, and standard of living depend on the nation's ability to lead the world in scientific discovery and technological development. Their website has a timeline that features all past recipients and features individual webpages and videos for each laureate.

The information requested on the application materials is solicited under the authority of the National Science Foundation Act of 1950, as amended. It will be used in connection with the selection of qualified applicants and may be disclosed to qualified reviewers and staff assistants as part of the review process, and to government contractors as necessary to complete assigned work. Disclosure may be made of awardees' names, home institutions, and field of study for public information/affairs purposes including press releases. Biographical and background information from publicly available sources may also be used for this purpose. See Systems of Records, NSF-12, "Fellowships and Other Awards," 63 Federal Register 265 (January 5, 1998). Submission of the information is voluntary; however, failure to provide full and complete information may reduce the possibility of receiving an award.