These are just a few of the questions currently being asked by researchers in the field of science and technology studies, or STS, that could help point the way forward in developing a more inclusive and accessible scientific enterprise.

Women, people of color, disabled people and other minority groups have been historically underrepresented in science, technology, engineering, and mathematics. As highlighted by NSF Director Sethuraman Panchanathan’s vision for the U.S. National Science Foundation and outlined by the National Science Board’s Vision 2030 strategic plan, the future strength of America's research and innovation ecosystem will rely on successfully building pathways to STEM education and careers for these groups. 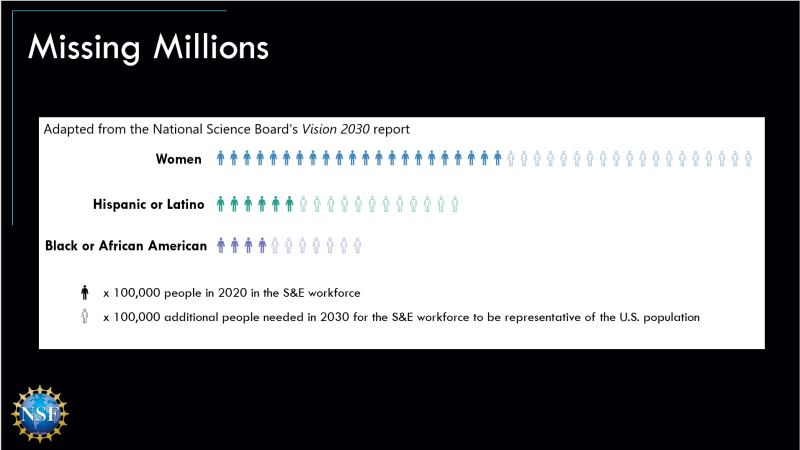 Research supported through NSF's Science and Technology Studies program provides a unique framework for both better understanding and resolving underrepresentation in STEM. STS research funded by the Directorate for Social, Behavioral and Economic Science utilizes historical, philosophical, and social scientific methods to examine how STEM knowledge is produced, disseminated and applied to address pressing societal issues. By examining the processes by which scientific knowledge is created, STS projects can illuminate the contributions of underrepresented researchers that have been historically unrecognized.

Where are the women?

"Science and technology scholars started raising the question 'where are the women?' in the 1960s and 1970s. This was a beginning of multiple conversations about diversity and frequently asking, 'how can we increase participation of women in science?'" says Wenda Bauchspies, one of the STS program directors at NSF.

"These conversations started very early and have continued now with other aspects of diversity, such as considering LGBTQ perspectives and scientists' racial identities. It has been integral to STS since the very beginning to ask critical questions about power dynamics in science and to think about who is at the table, who is not at the table, and why," Bauchspies explained.

For example, Pnina Geraldine Abir-Am, resident scholar at Brandeis University, received an NSF award in 2018 to study the history of the discovery of RNA splicing. This work emphasized the predicament of female and junior scientists and included in-depth interviews with the scientists that participated in this discovery as co-authors. This research uncovered the critical contributions several women made to the discovery, focusing especially on the contributions of the women who served as first or lead co-authors of the research articles. Such a position indicates a major involvement in the reported findings, yet these women remain unknown because they were excluded from recognition for this discovery and overlooked for the 1993 Nobel Prize.

As detailed in a recent article by Abir-Am in American Scientist, the series of events that led to these women going unrecognized for so long had much to do with the deeply rooted gender, race/ethnicity, region and rank biases that are held by many researchers. These biases affect the power dynamics between senior scientists and junior members of their research teams; expectations for authorship on scientific publications; and the decisions that universities and other organizations, most notably prize-giving ones such as the Nobel Foundation, make about who should be recognized in collaborative discoveries.

"Power in science is a very complicated thing. These power dynamics affect everybody but become more problematic for women and people from cultures that are not dominant in science. As a result of such gender and social bias, fewer women are mentored to succeed in the higher echelons where claims to the status of discoverer are adjudicated among favorite contenders," says Abir-Am.

"Historians tend to focus on the most successful or most famous scientists," Abir-Am continues, "But sometimes, when you examine scientific discoveries in an inclusive manner, looking at both the Nobel laureates and the obscure co-authors, you find out that those who had been marginalized did more crucial work than those who stayed in the center."

Julieanna Richardson's ScienceMakers initiative, which was funded by NSF's STS program beginning in 2009, looks beyond famous scientists. As a part of the extensive HistoryMakers archive, ScienceMakers provides biographies and oral histories of over 200 African American pioneers in STEM professions. Featured scientists range from acclaimed figures like mathematician and computer scientist Katherine Johnson to lesser-known scholars who have made substantial achievements in their respective fields.

By collecting firsthand accounts of how Black scientists from different backgrounds forged their careers, this project improves our understanding of the many forces and factors that keep individuals in STEM education and STEM careers, and what may contribute to their leaving. ScienceMakers also amplifies compelling stories about accomplished scientists, with accompanying videos that can inspire children and young adults to enter the STEM workforce.

"What is interesting about these stories is learning all the different ways people came into their scientific endeavors. Sometimes it was because of their family watching National Geographic. Or they were a young person that watched the race to space and dreamed of becoming an astronaut. For Black kids, and for anyone else who may be trying to find their place, these stories may show them that there is space for them in scientific and engineering fields," says Richardson.

According to Fred Kronz, the other STS program director at NSF, "By focusing on science as a social process, STS research has begun to reveal that there actually have been a lot of people from minority groups doing science. Recognizing their contributions and continuing to broaden participation based on things like race, gender, and geographical location, are fundamentally issues of social justice."

In addition to properly recognizing the accomplishments of women and minority researchers, STS research can identify and center marginalized perspectives in the production of scientific knowledge. With the support of an NSF CAREER award, Ashley Shew, an associate professor at Virginia Tech, is currently collecting narrative accounts of disabled people regarding the assistive technologies they use. This research will explore the differences between the lived experiences of disabled people and the perceptions about disability technology held by scientists, engineers and non-disabled people in the wider culture.

As Shew explains, "We should be respected as experts in a lot of places where we are not. Disabled people are often treated as test pilots or good objects to work with if you're trying out new techniques. We're seen as users and never as makers, even though a lot of disability technologies couldn't exist without co-creation with disabled people. But we're rarely cited or included as authors on the publications that come from our work. We are rarely trained in the disciplines we are supposedly helping."

When we talk about what it means to broaden participation, studying disability gives us room to start re-imagining our professional norms and behavior.

Ultimately, this project will create avenues for genuine collaborations that include disabled people in conducting the research and designing the technology that directly affects their lives. Research at the intersection of STS and disability studies, like Shew's work, not only broadens participation of disabled people in STEM but also sheds light on practices that can make STEM more inclusive for all.

"There are so many barriers to participation in STEM programs that are completely arbitrary. When we talk about what it means to broaden participation, studying disability gives us room to start re-imagining our professional norms and behavior. Disabled people come from every other category of identity, and people of all identities can become disabled. By reforming all sorts of disciplines to be inclusive and to actually value disabled expertise, they will also become inclusive of people from a wide array of identities and origins," says Shew.

From broadcasting the stories of historically overlooked scholars to centering the expertise of marginalized communities, STS research offers robust strategies for reaching the "missing millions" of underrepresented individuals needed to strengthen the U.S. STEM enterprise.