West of Boston is Worcester Polytechnic Institute, WPI — where the school song has 13 math expressions. “The wonderous place of innovation,” NSF Director Sethuraman Panchanathan called it in his 2022 commencement address — where fundamental research a decade ago is today game-changing technology for the sustainable, clean energy future.

A team at WPI innovated one of the world’s most efficient processes to recycle lithium-ion batteries.

Asked to pick, Eric Gratz, co-founder and chief technology officer of Ascend Elements said, "Lithium is definitely my favorite element because of its high voltage."

"If not lithium?" considered Yan Wang, WPI professor of mechanical engineering, before asking, "Can I choose lithium? The advantage is its power."

Science Matters should have guessed everyone would pick lithium.

Lithium-ion, or Li-ion, batteries are light, adaptable and have been powering consumer electronics since the dawn of the 1990s camcorder (thanks to NSF investments dating back to the 1970s in Nobel Prize researchers like John Goodenough and Stanley Whittingham).

Now, the world is counting on Li-ion batteries as we confront the climate crisis. Li-ion batteries are critical for renewable energy storage and power electric vehicles, or EVs. The auto industry is shifting, EV sales are increasing and President Biden's 2021 executive order aims for EVs to be half of all new cars and trucks sold in the U.S. by 2030.

In short, as EV manufacturing and clean energy scales, the demand for Li-ion batteries is anticipated to skyrocket. Right now, the path to a sustainable future depends on it.

But lithium and other critical battery elements like cobalt are scarce. Current mining operations can't meet demand and, especially in places like the Democratic Republic of the Congo, cause severe environmental and human harm.

New oil, white gold, falling behind — those are the terms used to describe the domestic Li-ion battery supply chain. “The U.S. doesn’t produce battery materials here,” said Wang. Not the minerals, not the materials. And when batteries are spent, “We ship batteries overseas for recycling, it’s not sustainable.”

And it’s a matter of national security as well as U.S. energy independence. That’s why President Biden invoked the Defense Authorization Act to jolt domestic mining, processing and recycling for advanced battery materials and manufacturing.

"We need to match the capacity of the battery 'giga-factories' with our own 'giga-recycling' facilities," said Gratz. "This isn't optional. For humanity and for the planet, we must do it."

Li-ion recycling technology exists because of the breakthroughs Wang and Gratz started working on over a decade ago. In addition to shredding, recycling and sintering facilities in Massachusetts and Michigan, Ascend Elements is building a recycling facility in Covington, Georgia, set to open this year.

"It will be the largest Li-ion battery recycling facility in North America when completed," said Gratz, "NSF had direct impact on that." 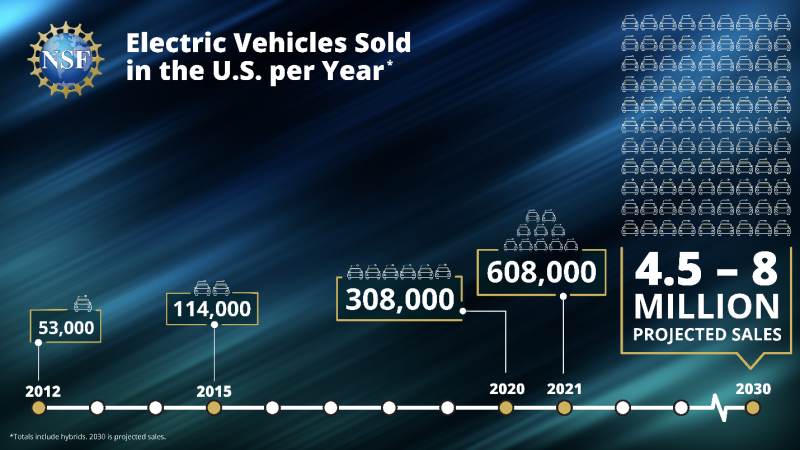 Once upon a time way back in 2012, we weren't talking about EVs in terms of giga-scale. U.S. auto sales that year were 14.5 million. But only 53,000 were EVs. Two years on the market by then and, as one article put it, "If you listen to mainstream media, you already know electric vehicles are a dismal failure."

But Wang thought it was just a matter of time. He saw that almost 100% of lead acid batteries in gas powered cars are recycled, and new batteries use about 50% recycled materials. Wang was convinced. Someday, there would be a similar need to recycle and reuse materials in Li-ion batteries.

But back then, recycling Li-ion batteries was challenging. The technology was not great, and few people anticipated the need. "Not many people believed in me," Wang said. At conferences, presentations on topics like materials would get prime-time spots. As for recycling? "It would be on Friday afternoon, maybe three or four people would show up."

Then there was the question of funding. Often, it follows results. This is a challenge for pursuing fundamental research, either basic or applied. It's why NSF exists. The Center for Resource Recovery and Recycling, CR3, an NSF Industry-University Cooperative Research Center, was the first to invest in the team's research.

Said Gratz, "CR3 was the only funding we could find that thought fundamental research on Li-ion battery recycling was a good idea back in 2012."

Recycling lead acid batteries is simple because you know what you're working with. But with lithium-ion batteries, "You don't know the chemistry," Wang said. The cathode, key to voltage, can have five different chemical compositions.

Then there is the challenge of isolating and extracting materials from the cathode solution, elements that have similar properties, being neighbors on the periodic table. "It's costly, complex, and if you're using an organic solvent, then you have to recycle those," said Wang.

Another investment from NSF proved the team's fundamental research had commercial potential. "Batteries are an applied technology, if we just publish papers, that's not enough of an impact," said Wang. The team knew they had a breakthrough, so they went to entrepreneurial bootcamp.

"The training took a nerdy scientist and got him comfortable meeting and talking with other people in a business setting, which for me was a key skill set I really lacked at that time," said Gratz of the NSF Innovation Corps (I-Corps™) program.

Today, Ascend Element's technology can customize and engineer cathode material "in many ways — from composition, particle size and distribution to crystallinity, morphology and porosity — all tailored to specific customer requirements," said Gratz.

And get this, batteries made from the recycled materials charge faster, last longer and work just as well as batteries from new materials. The company recently sold its first batch of sustainable battery material to a U.S. Department of Defense contractor for use in a mission-critical defense system.

"It can take a long time to develop a new technology and then commercialize it at scale. In our case, it has taken more than ten years," said Gratz. Ascend Elements is in Series C funding and has raised $90 million to date.

Wang continues to purse ways to make batteries less expensive, lighter, more powerful and sustainable. That includes research and research impact. "When I joined WPI, I asked myself what kind of professor do I want to be? We do fundamental research. We publish papers. We advise students. Using our research in partnership with others — companies and entrepreneurs — that's my passion, my dream. That's what I'm doing."

The Pacific Islands: The front line in the battle against climate change