Lexi Dixon, a junior from Kansas City, Missouri, loves music, singing, robots and working with her hands. Her school’s FIRST Robotics team builds cars for children with mobility impairments through GoBabyGo, a program started in 2012 by NSF-funded scientist Cole Galloway. At a GoBabyGo build event at her high school in 2019, Lexi and her robotics team customized a Power Wheels Wild Thing for three-year-old Brooklynn, who has spinal muscular atrophy. The following is a lightly edited Q&A. You can also read about Brooklynn’s story here.

Q. How did your FIRST* Robotics team get connected with GoBabyGo?

I think one of our team members had worked with GoBabyGo in the past and decided there was a link between FIRST and GoBabyGo. We work with Arduinos and power distributors and wiring things all the time. To use something like that to help kids in our community seemed like the natural connection to me.

*For Inspiration and Recognition of Science and Technology, or FIRST, is a youth organization that encourages and inspires students in engineering and technology fields.

Q. What were your first impressions working with GoBabyGo?

It’s one thing to learn how to code a robot and sit in front of a screen all day and write code in order to power and lift up an arm. It’s been another thing for me to realize that engineering extends far outside a basic mechanical engineering degree. It’s meant a lot to me to work with other people and be with other people and be an answer to “Hey, I have a problem, but it’s ok, I have an answer.” It’s been really impactful on me to see something that I’ve done help someone else directly.

Q. Tell me about some of the modifications you made to Brooklynn's Wild Thing vehicle? 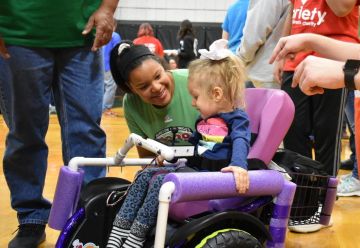 When Brooklynn gave us her application, the first thing we did was bring the family to our school and our workshop to learn about her and learn about the intricacies of her disability and her day-to-day life. Of course, the first thing we learned was her favorite color is purple. We were like, ok, we have to make the car purple. We also noticed that her stroller was reclined. She breathes better when she is reclined, but she also liked to sit up to see everything around her. We decided to make the seat adjustable in the Wild Thing so that she can either sit up or recline. That meant also making her joystick adjustable in terms of length on the base.

Another thing we found was that she had a machine to help her breathe a little bit better, so we added a basket on the back of the car to hold that machine and anything her parents needed to keep with her. In terms of electrical modifications, we gutted the whole electronics of the original machine and built a new system, including a processor, an on/off kill switch mounted in the back, motor controllers and power distribution buses. With that, we had to write new code that included a feature to ramp up the speed whenever she accelerated so the car wouldn’t jerk and make Brooklynn uncomfortable.

Q. What was that moment like when Brooklynn first saw and drove her new Wild Thing at the GoBabyGo Build Day at your school?

Q. You've presented at a couple of big conferences, and at the FIRST Robotics World Championship in Houston. How else are you connecting GoBabyGo with students and other robotics teams?

We created the GoBabyGo Connect forum, which connects FIRST Robotics students directly with parents and with charity sponsors. To have that direct connection between the teams and the families has been really important for the design process and the logistics of meeting and coming up with car designs. In Houston, I and three other students presented on how to start your own GoBabyGo chapter, what an event looks like, how to contact families in a way that is comfortable and respectful to them, and the caliber of the emotional experience when bringing engineering skills to the real world and to adaptive technology that helps real people.

Q. How did you get into robotics?

I consider myself a sociable person. Robotics wasn't something that I was interested in initially. Mr. Wood, my 8th grade math teacher, said I was good at math and should see how I liked robotics. I was like, you know, robotics isn't really for me. He put my name on the list anyway and I came to the first meeting. I just fell in love with it, working with my hands, getting in there. Having a goal and having a set game in mind has just really changed my perspective on how to work with a team, how to work with my friends, towards something in common.

Q. Why did you initially think robotics wasn't for you?

I always considered myself to be an emotional, sociable person. I guess feeling stuck in a shed all day didn't seem like something I would enjoy, for lack of a better explanation.

Q. You mean you had this perception that engineers were people who worked alone in sheds? 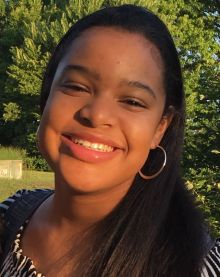 Yes, that I would be stuck at a desk all day, doing CAD [computer-aided design] and just kind of being by myself. I found that engineering is nothing of the sort. If anything, it's working with a team and coming up with an idea that works with everyone else's ideas -- because everyone has ideas. It's like a business. It's taking your product, your robot, and, in order to make others feel as emotionally connected to your robot, you have to market your robot, and you have to market for your team, and you have to advocate for yourself. I feel like that desire to be around people and be around my friends, who I'm so grateful to have met through FIRST Robotics, and pouring those emotions and social experiences and myself and my own personality into robotics has made all the difference. It's made robotics into something that I love to do and something that helps me apply the math and science that I already love with talking to people, which I love doing too.

Q. Women remain underrepresented in STEM fields like engineering. How would you encourage more girls to explore engineering or to try robotics?

I think it’s almost like introducing a kid to medicine. There’s not just one branch of medicine, and there’s not just one branch of robotics or engineering. There’s mechanical. There’s electrical. There’s environmentally oriented engineering that looks at the weather, at power plants and clean energy. There’s adaptive technology, like what we’re doing with GoBabyGo, helping real people in the real world. There’s space. There's underground. There’s just so many things that have math and science ingrained in them. I think it's having those experiences available to them, whether it’s through a fun math teacher or quick little documentary. Just providing girls with those experience and showing them that it extends so much further than just algebra and calculus, I think, will hopefully inspire more girls to get into engineering.