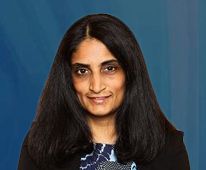 Dr. Lakshmi Balachandra joins NSF with over 15 years' experience as an academic, with expertise in bias and decision-making in the entrepreneurship context. An accomplished researcher, Dr. Balachandra has multiple peer-reviewed papers and white papers that primarily focus on gender bias in entrepreneurial funding. She is a tenured associate professor of entrepreneurship at Babson College and has taught at premier institutions including Harvard Business School, Harvard Extension School, Boston College, University of California, San Diego, and MIT's Sloan School of Management. She has served on a variety of boards including private companies and at the nonprofit and municipal levels. Her work has received a wide range of press, including coverage by AP, USA Today, Businessweek, the Financial Times, Harvard Business Review, The Boston Globe, Entrepreneur Magazine, Inc. Magazine and Reuters. She has been awarded fellowships for her research on venture capital decision-making from the Women and Public Policy Program at the Harvard Kennedy School of Government, the Kauffman Foundation and the Program on Negotiation at Harvard Law School.

In addition to her work as a professor, Dr. Balachandra has also worked extensively with the private sector — teaching executives worldwide courses in negotiation and improvisation and working in entrepreneurial finance as a venture capital investor and entrepreneur. She opened and operated a retail specialty toy store in California after graduating from college and then spent seven years in finance (private equity and venture capital) where for five of those years she was the only woman investor in the room. She then worked on a team of all women at the first women-focused venture capital fund in the country. These starkly different experiences focused her research on the role of investor diversity for financial decision-making processes. Her research identifies the social science and organizational rationales for expanding diversity, equity and inclusion measures, expertise that that she now brings to NSF and the policy sector.

Dr. Balachandra has a Ph.D. in management and organizational behavior from Boston College, an MBA from MIT's Sloan School of Management and a B.A. in environmental studies and economics from the University of Chicago. Her academic work has illuminated the inequity and inequality that exists in early-stage venture funding. But throughout her academic career, she has sought to drive change of the gender-biased status quo through action. While working for the largest women-owned, women-focused venture capital firm in the country, she founded the Women’s Venture Capital Network, the first network of its kind in the country, where she organized, created and managed numerous networking events and educational panels for women professionals in the industry. Recently, she also created a venture capital summit for women, Capital W: the Boston Women’s Venture Summit. During (and in between) all of this, she has also been a professional stand-up comedian and improvisational comedian performing in comedy clubs across the country...now performing nightly as a mom of three!