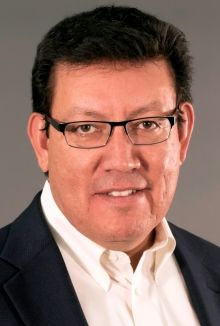 Gabriel P. López is Vice President for Research and Professor of Chemical and Biological Engineering at the University of New Mexico. His current research interests include biointerfacial phenomena, biomaterials, self-assembly and bioanalytical microsystems to address problems in medicine, biotechnology and environmental quality. His current technology transfer and translational activities include serving on the Board of Directors of STC.UNM Corp. and collaboration with several industrial partners. Prof. López’ professional service activities include outreach to, and advancement of, groups under-represented in research as well as participation in several scientific societies.

López has published ≈200 peer-reviewed scientific papers and book chapters and is inventor on 42 issued U.S. patents. He has served as research advisor to 55 graduate students, 39 postdoctoral fellows and 78 undergraduate students; 17 of his former research protégés have gone on to professional academic positions. He has served as PI or coPI on grants totaling ≈$50 million and his research has been supported by several sources including the NSF, NIH, DOE, NASA, DOD, industry and nonprofit foundations. He is a Fellow of the National Academy of Inventors, a Fellow the American Institute for Medical & Biological Engineering, an STC.UNM Innovation Fellow and the recipient of the W. Moulton Distinguished Alumni Award from the University of Washington, the Stansell Family Distinguished Research Award from Duke University’s Pratt School of Engineering, an NSF Faculty Early Career Development Award, and an Outstanding University Inventor Award from the Semiconductor Research Corporation.